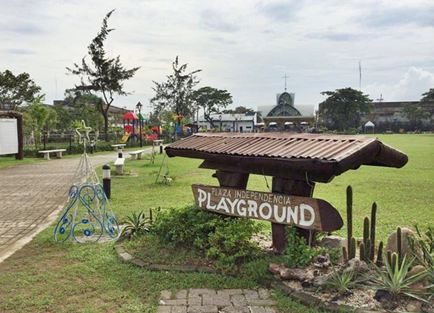 If you want to go around the Cebu City Downtown and nearby places, here are great stop we could share. You can have fun walk hopping from first place in the list to the next or you can do the reverse way. They are close to each other so you don’t need a car or perhaps you can ask your driver to wait at some place nearby which would likely be in Magellan’s Cross or in Plaza Independencia since there are parking spaces there.

You can also be adventurous by hiring a sikad-sikad or habal-habal and at some occasion, a chance to ride a kalesa. But I guess you better enjoy the place by foot. 😉

This was formerly a detention and rehabilitation center. When the city jail transferred, this building were renovated and a museum were created. The inside already looks great when we got there in 2018, in fact some wedding receptions are held here. This is an old structure built during the 90’s. It was a house of Gorordo Family, become a museum and opened to public later in the 90’s. The ground floor has a patio and a small gallery. In the 2nd floor you can find few artifacts of the 80’s and 90’s. Gatherings and special events, private or government are held on it’s wide grounds. Probably the oldest house in Cebu City, built in the late 17th century and still standing. The house is filled with contemporary and ancient artworks, antique pieces and Cebuano-made native furniture. In 2nd floor, you can find life-sized statues, religious icons and images of saints. During special occasion at present time, this is surrounded with glamorous lights, which signals, something is celebrated here. The Heritage of Cebu Monument (in Parian)

The construction of this structure started in 1997, opened and inaugurated December of 2000. The monument portrays significant history of Cebu and miniature of historical landmarks. One of the oldest streets in the Philippines is Colon Street and this little obelisk marks the end point of the street eastwards. It stand right next to Parian Monument. One of the oldest church in the Philippines established during the 15th century. The structure is renovated but still significant old materials are preserved. It was said though that it was originally built with wood and nipa palms according to “Balaanong Bahandi – a book  on the Sacred Treasures of the Archdiocese of Cebu. This church is the oldest Roman Catholic church established in the Philippines. It was built on the same spot where the image of the Sto. Nino de Cebu (child Jasus) was found in 15th century by Spanish explorers. Sto. Nino the Cebu is the busiest church during Sinulog – one of the biggest events and festivities in the Philippines which drove foreigners to the country every January. It is believed to be a Christian cross planted by Spanish explorers headed by Ferdinand Magellan upon there arrival in Cebu on March 15, 1521. The original cross was believed by the people to have miraculous healing powers so they started chipping it away. Because of that, the local officials encased it with another wooden cross made from tindalo. It is now housed in a small kiosk seen below. The ceiling were painted with historic images and synopsis of history on the walls. This site has many names in the past, at later time till today it is called Plaza Independencia which named to symbolizes independence and freedom of the Philippines from its conquerors. Today, the surroundings been modernized and turned into a plaza, a park where people can go, relax and chill. Underneath Plaza Independencia is the tunnel from SRP express heading towards Mandaue area. Is just behind Plaza Independencia. Historically, it is military defense structure fronting the sea to look out for incoming enemies. It was originally made from wood, which picture of the structure can still be seen in the displays inside. Old cannons are intact in second level. That would take half day probably. Your might be tired already and you can take a quick nap either in Plaza Independencia or inside Fort San Pedro. It’s relaxing under the shades of trees and fresh air.

Holy Chalet is a small shop where you can look for religious items and artifacts. This one is beside Metropolitan Cathedral. Recently, the overall structure were converted into a museum. Thirsty, after heavy day out?

If you wan’t something refreshing, nutritious and nutrilicious, you may want to check out the flavored ice cream and super milky drinks in Dairy Box.